MONEY-value of silence
by Masaki Hirano

In the beginning of the 21st Century, the collapse of subprime lending occurred in USA as a symbol of a bankruptcy of Lehman Brothers Holdings Inc. provoked a large-scale credit contraction and keeps on causing a serious financial crisis to the world. A lot of people lost their houses, jobs and even hopes.During the 20th century, after wars or revolutions finishing, hyperinflation occurred and then devalued currency was carried out frequently. When did the human society give roles as storage(saving), interest(self-propagation) and derivative financial instrument to "money" which was an originally means as a measure of labor or equivalent give-and-take of goods?

It is positioned on a destiny of a large bankruptcy. It contradicts with "rhythm of universe" clearly. Air and water exist since the earth was born, but it is just several thousands years ago that the human being created a system of "anti-aging money". How can we endure the economic disparities while we constitute a human society. If the "present" that a lot of wealth piled up on the planet is possessed by a few people, is considered as the point of limit, it should be time to suspect common sense of "money" and snuggle to nature. Some stock certificates, banknotes, bonds and military hand votes used for this exhibition are completely worthless and redemption of some expired. There are some of firms which could avoid bankruptcy but was purchased with low price and has still remained the company name. Moreover, there are some that its value was detracted by hyperinflation but was paid at face value. 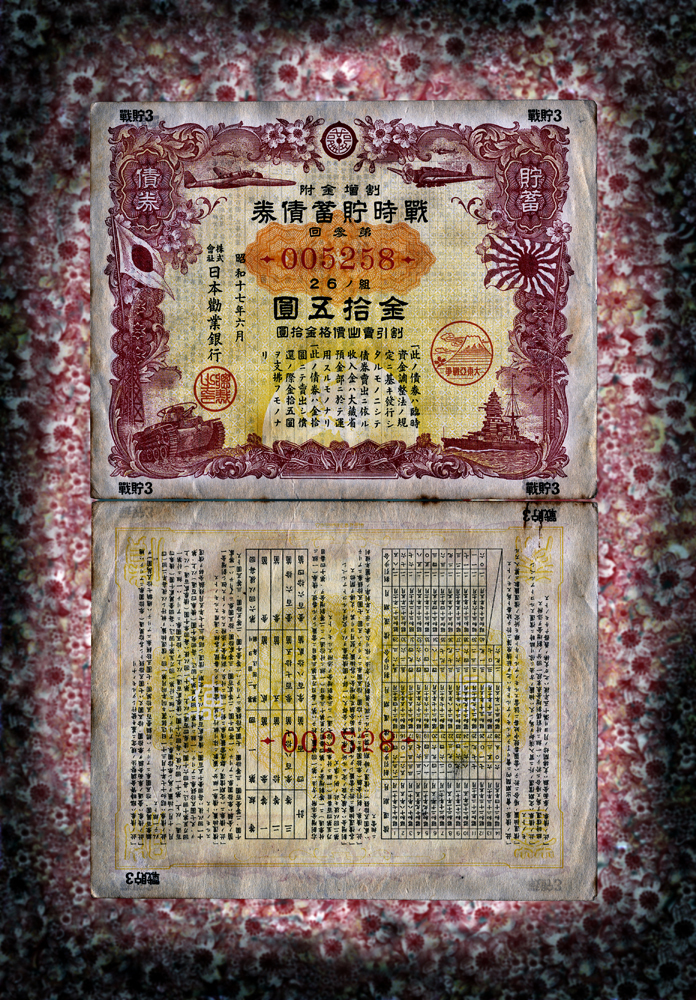 Wartime National Treasury Bonds-Japan
According to the law established in 1937, The Empire of Japan continued to increase government bonds (for war expenditure procurement). These war bonds were sold at department stores, post offices, tobacco shops and others. Everything became worthless after the defeat. 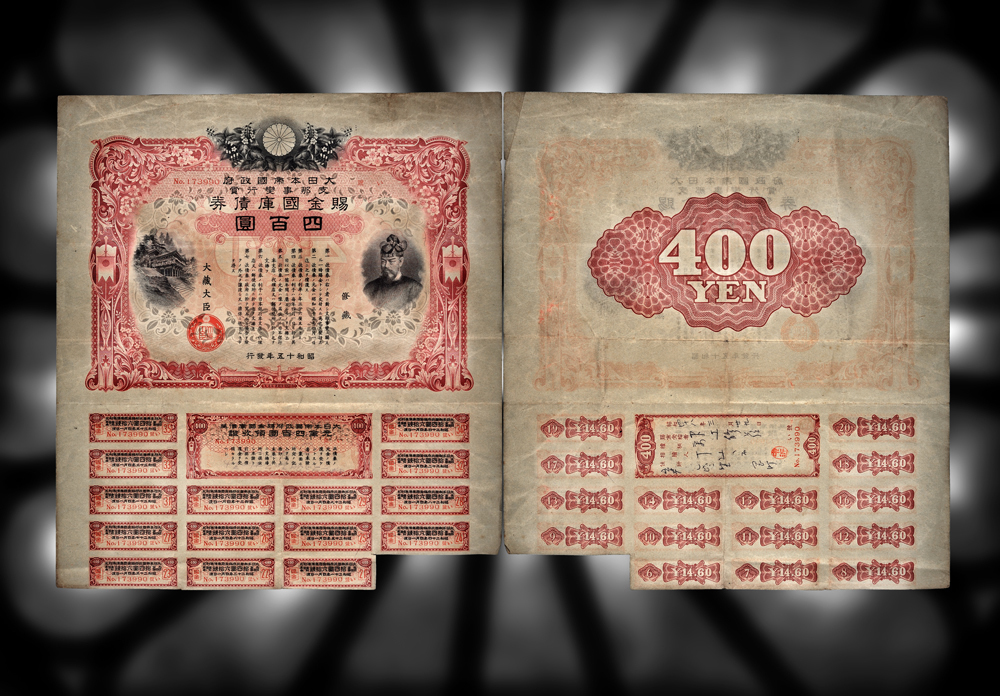 Grant treasury bonds
It was given to Japanese soldiers who served in World War II instead of compensation.
About 3.8 million of them were issued, about 1 billion yen.
Everything after the defeat became ineffective. 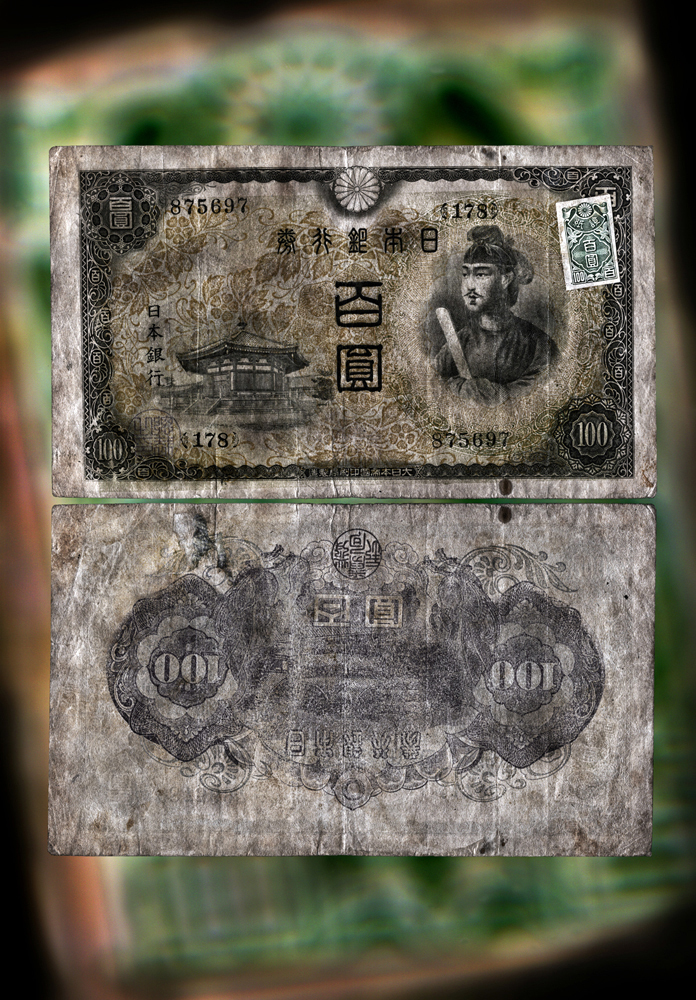 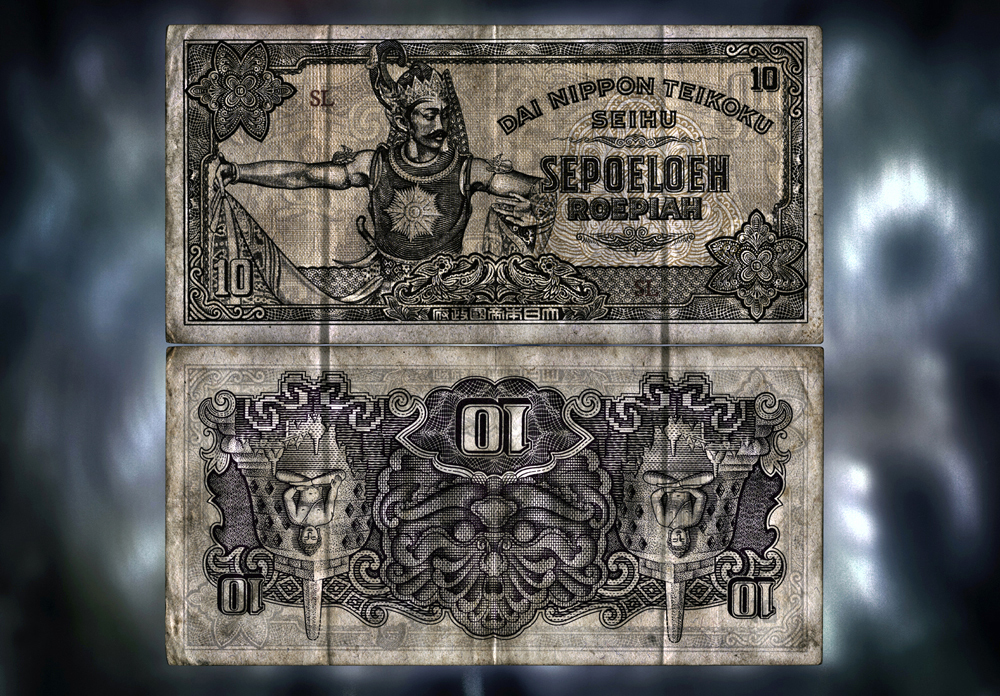 Published by the Japanese Empire of Japan. Military currency10 rupiah.
It was distributed in the former Burma area and became ineffective after Japan's defeat. 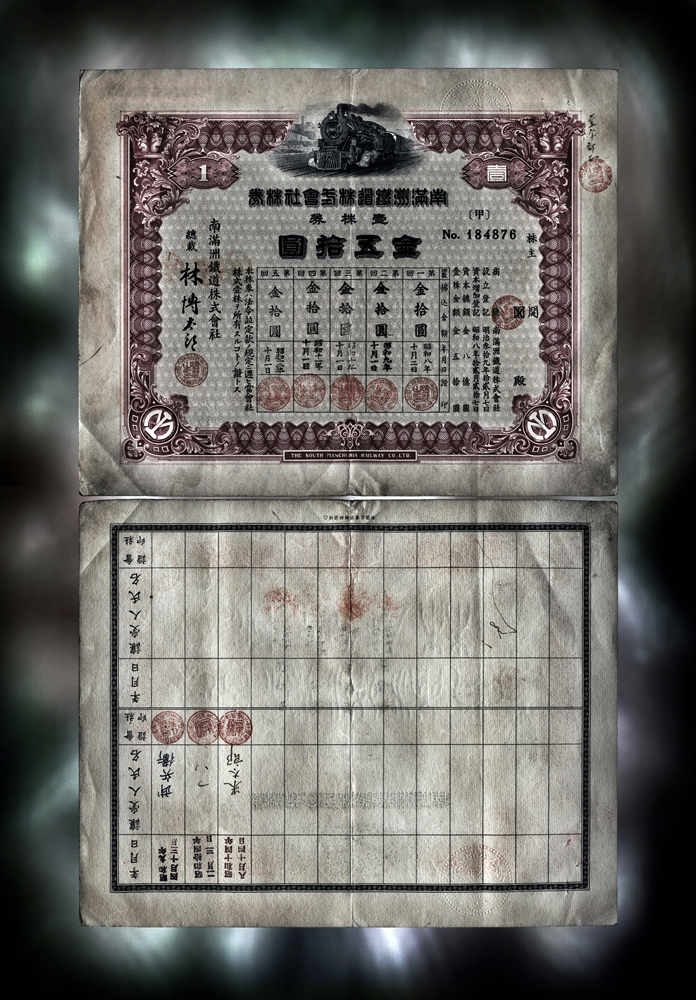 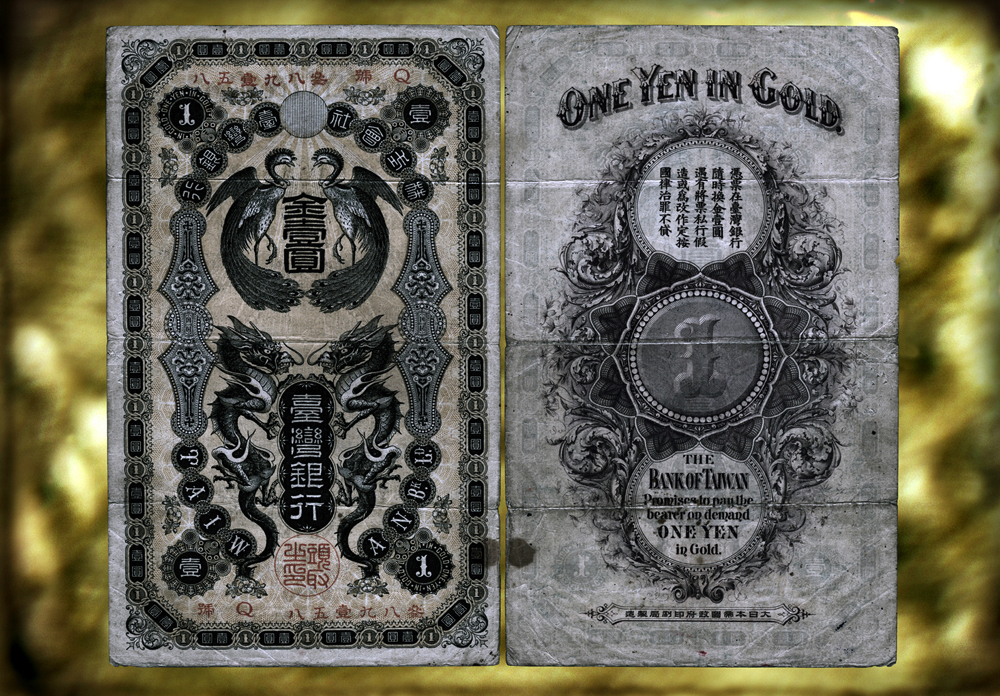 Taiwan Bank Convertible Bank Notes
Taiwan became a Japanese colony as a result of the Sino-Japanses War. Established in 1899. This bank played a major role in advancing Japan into Southeast Asia. It was dismantled after Japan's defeat. 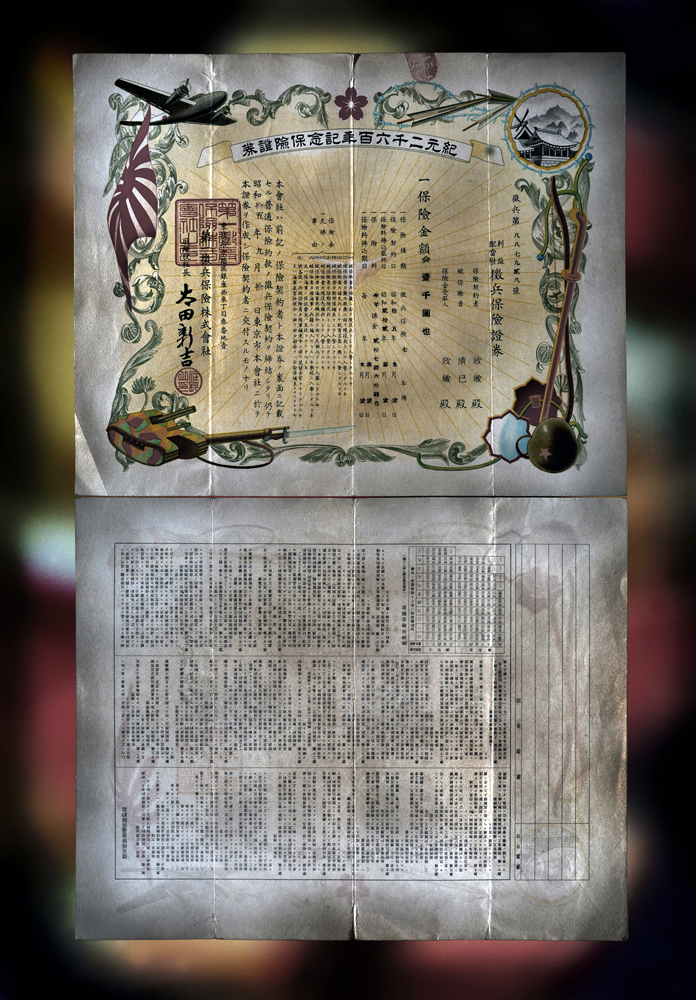 Draft insurance policy—Japan
Japan conscription insurance company was founded in 1898.
A Japanese boy less than 15 years old was able to join.
Boys are important people who support the old age of their parents.
Despite being poor, parents participated in draft insurance so that the lives of old age will not be lost by the war. 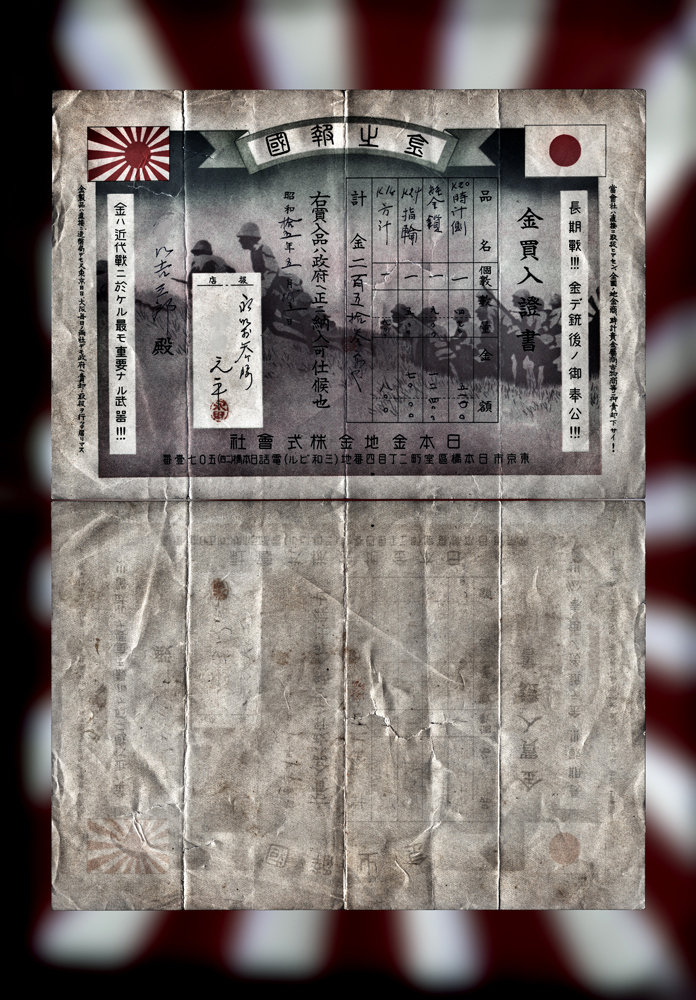 Gold purchase securities - Japan
In 1938, the "National Mobilization Act" was enacted from the necessity of continuing the war.
Forcible collection of metal owned by citizens was carried out for weapons production (except for gold teeth and gold pens). 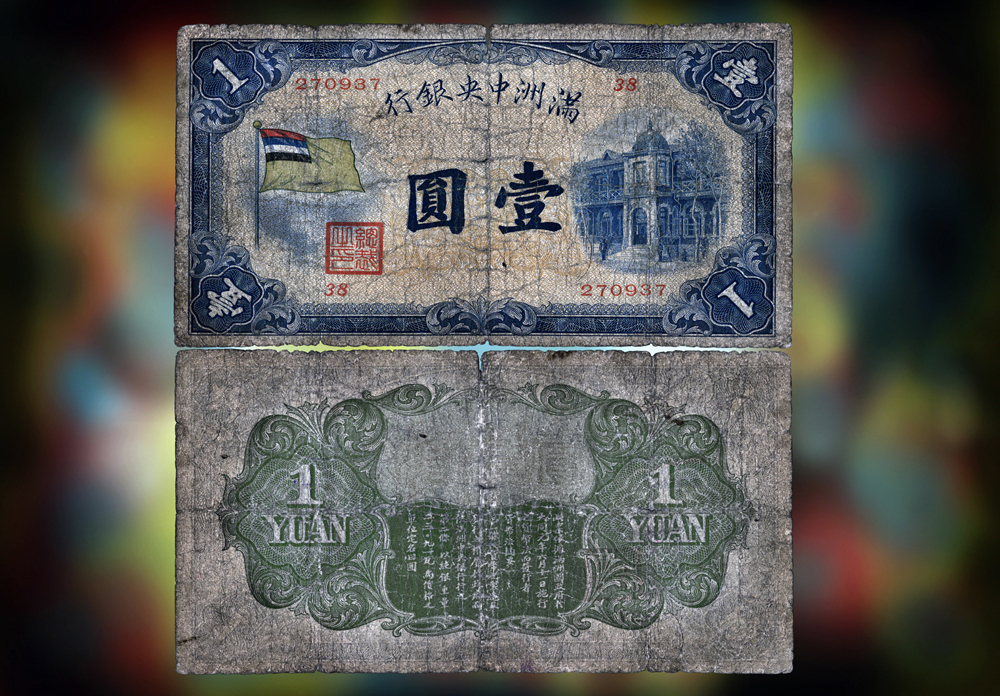 Manchurian Central Bank Note (Nonconvertible banknotes - Manchuria Country is a Japanese colony)
This bank was founded in 1932, after the establishment of Manchuria County. There was no obligation to exchange with gold or silver.
Distribution stopped in 1947 after Japan's defeat. 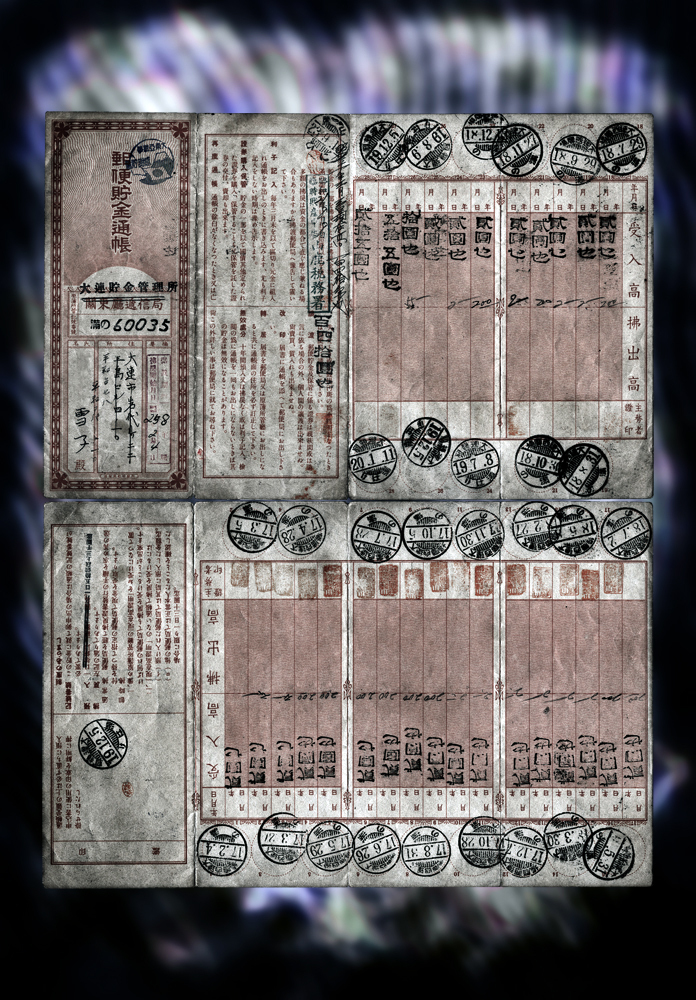 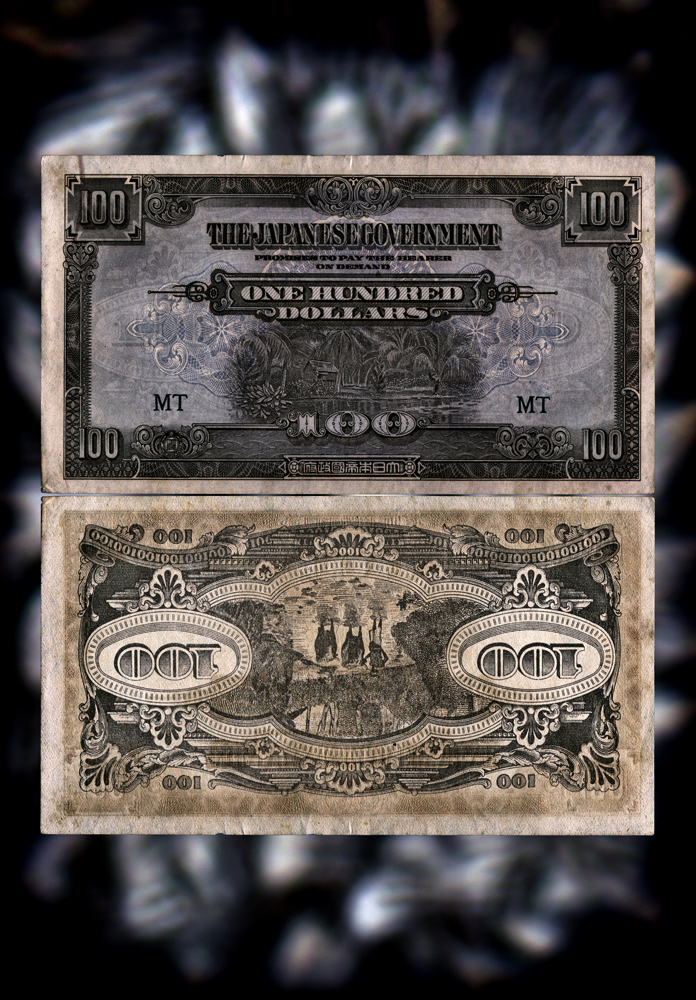 After the defeat of Japan, the San Francisco treaty abandoned the claim right. There is no compensation after that. 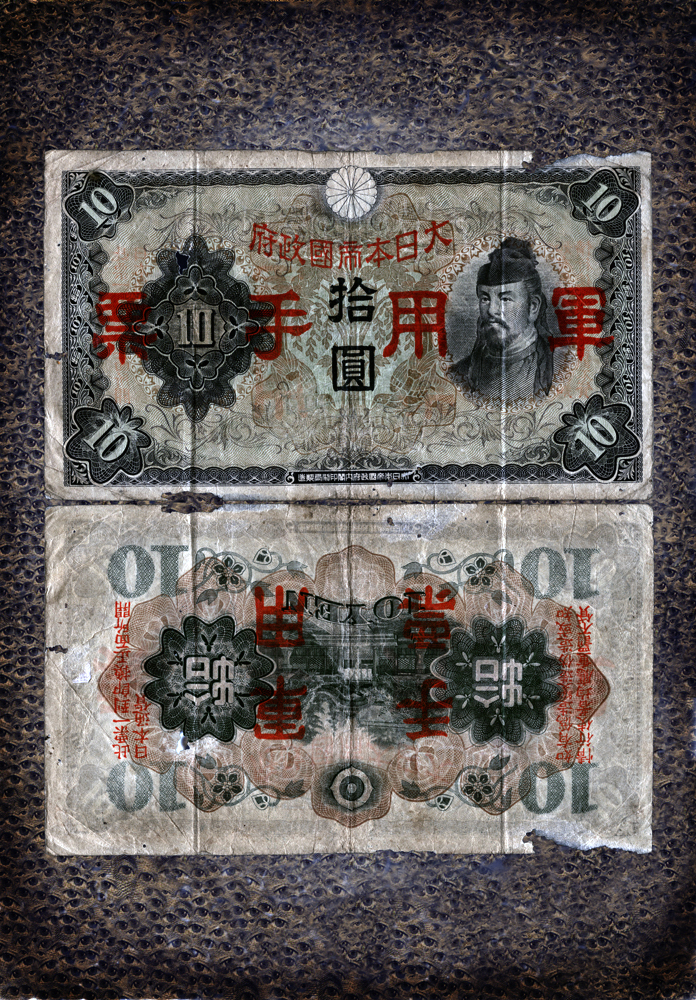 Military currency (second Sino-Japanses War) –Japan
Since 1938, 1,536,000 copies have been issued in Asia, and residents were forced to change money. Following the defeat of Japan, the San Francisco Peace Treaty lost their claims. However, lawsuits seeking compensation after the war have occurred frequently in all parts of Asia, but all lawsuits have been dismissed. 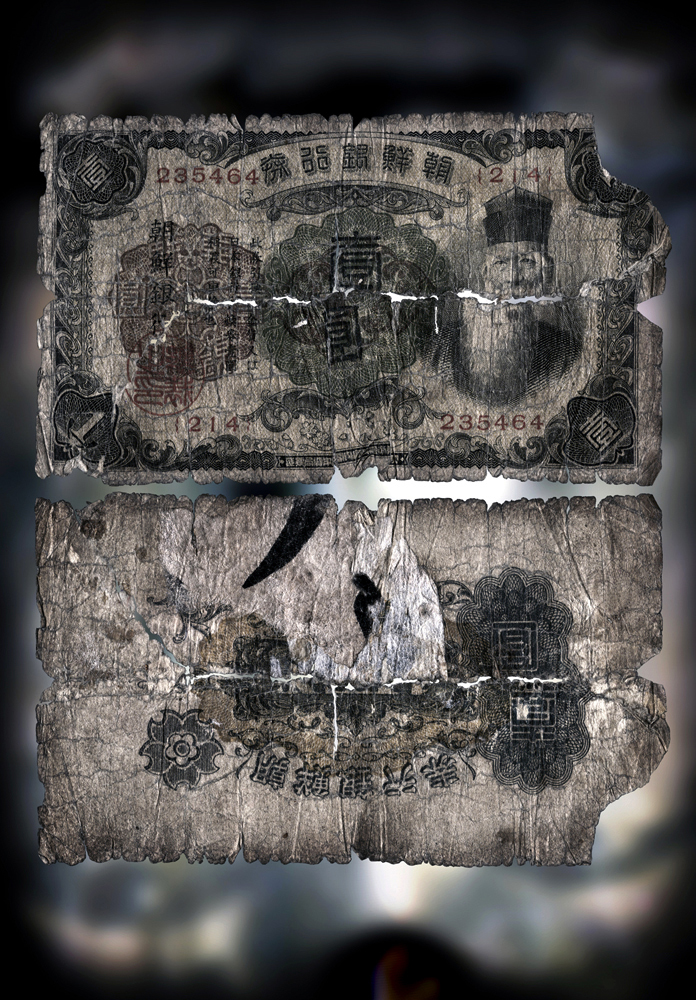 Korea Bank was founded the following year when it became a Japanese colony in 1910. Korean bank tickets were guaranteed to convert with gold coin and Japanese bank notes. It was dissolved by GHQ after Japan's defeat. 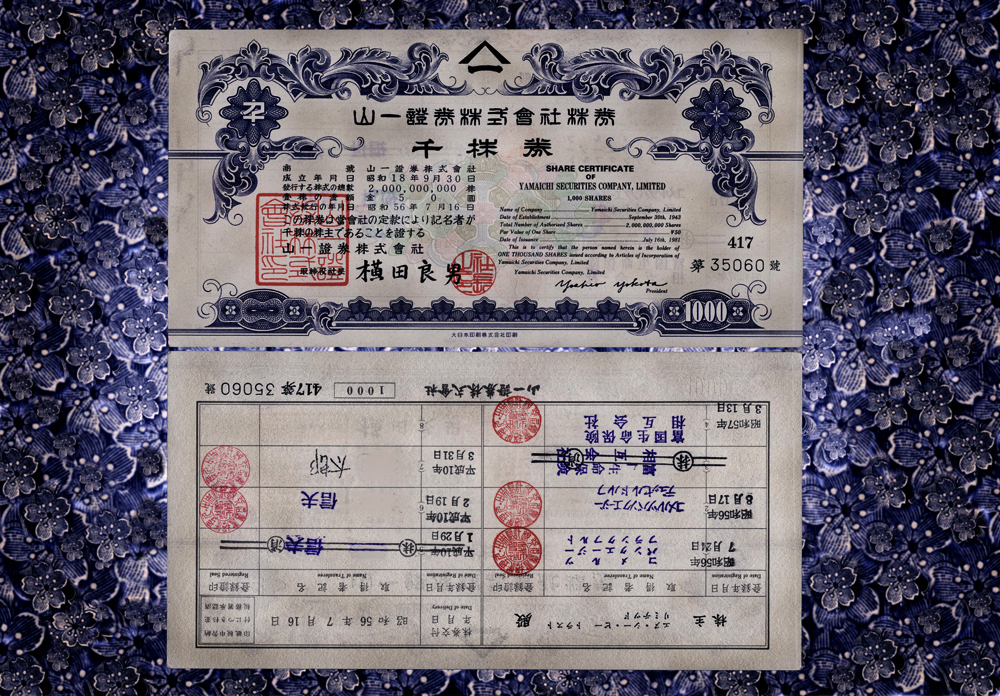 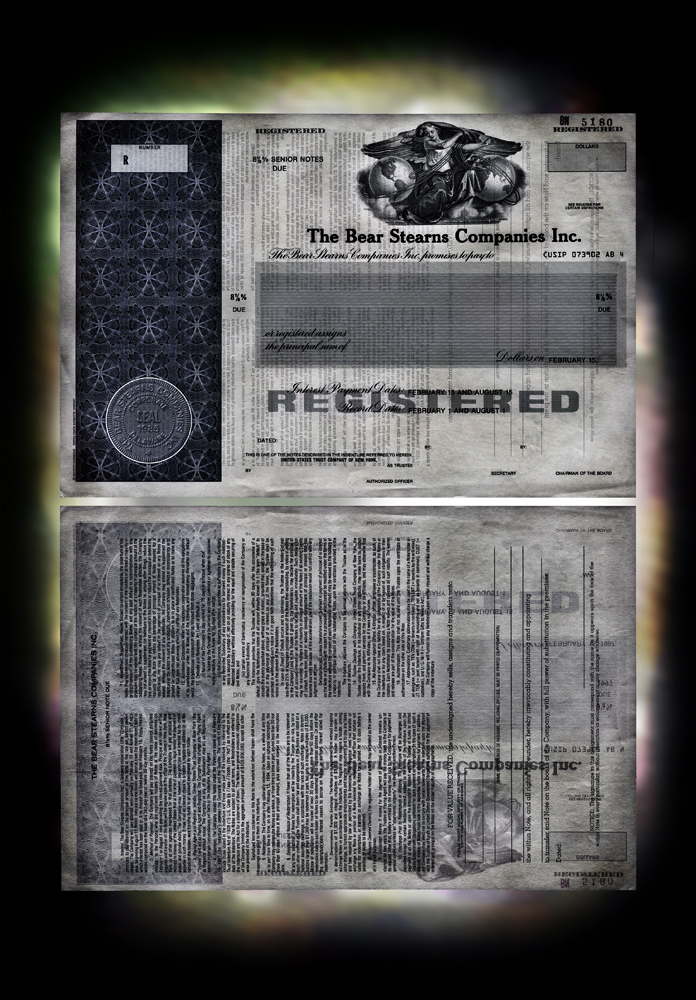 Bear Stearns Stock certificate USA
A major investment bank in the United States founded in 1923. The peak period of this investment company was ridiculed as "Vamp of the recession". It collapsed in the subprime loan problem in 2007, and was bought and sold by JP Morgan Chase Bank. 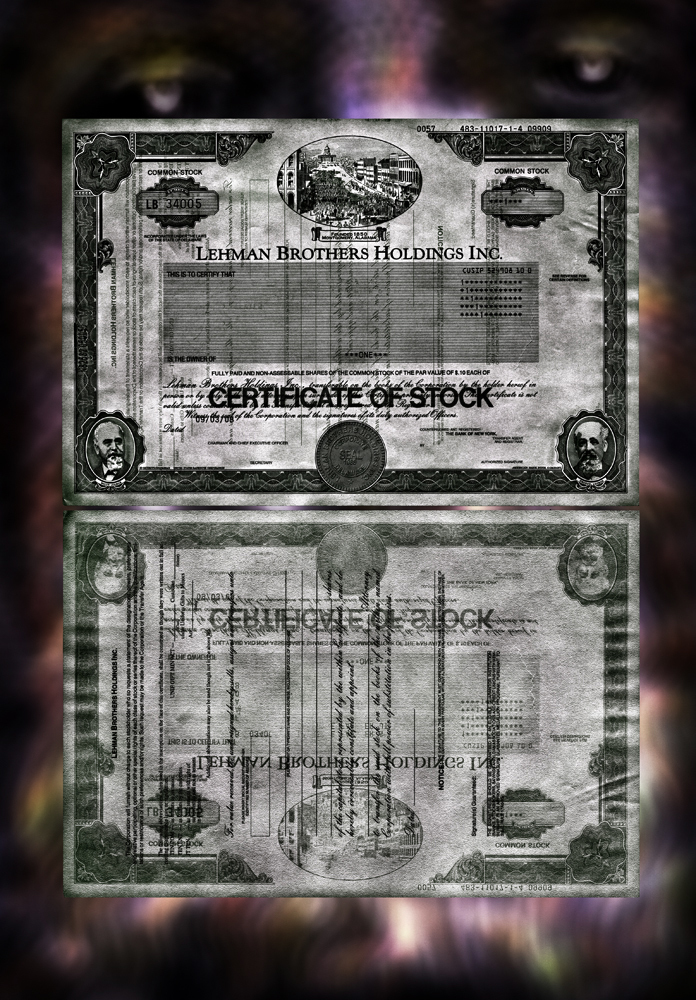 Lehman Brothers share certificate - USA
This securities company founded in 1884 failed in 2008 due to the burning of the loan due to the collapse of the American housing bubble.
Total liabilities were $ 631 billion.
Losses of financial institutions worldwide amounted to approximately 1.3 trillion dollars (International Monetary Fund announcement). 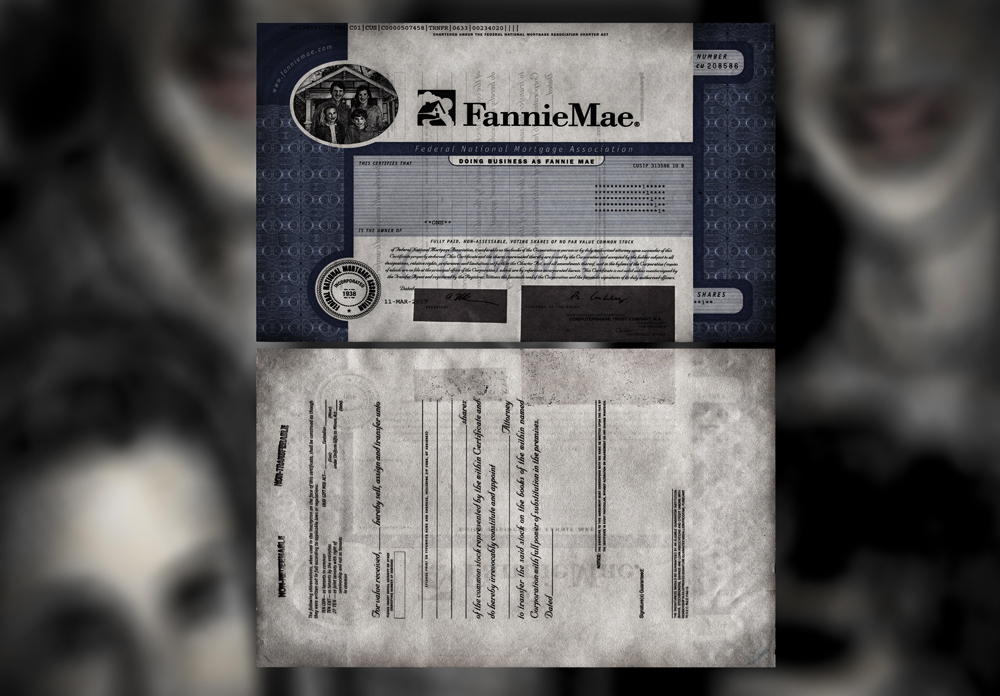 Fannie Mae-USA
Fannie Mae Securities (Federal Home Housing Corporation, USA)
Established in 1938 with the aim of providing stable housing.
The securities of this securities company had high creditworthiness as a federal government agency bond. However, it caused a loss of $ 2.1 billion due to the issue of subprime loans. 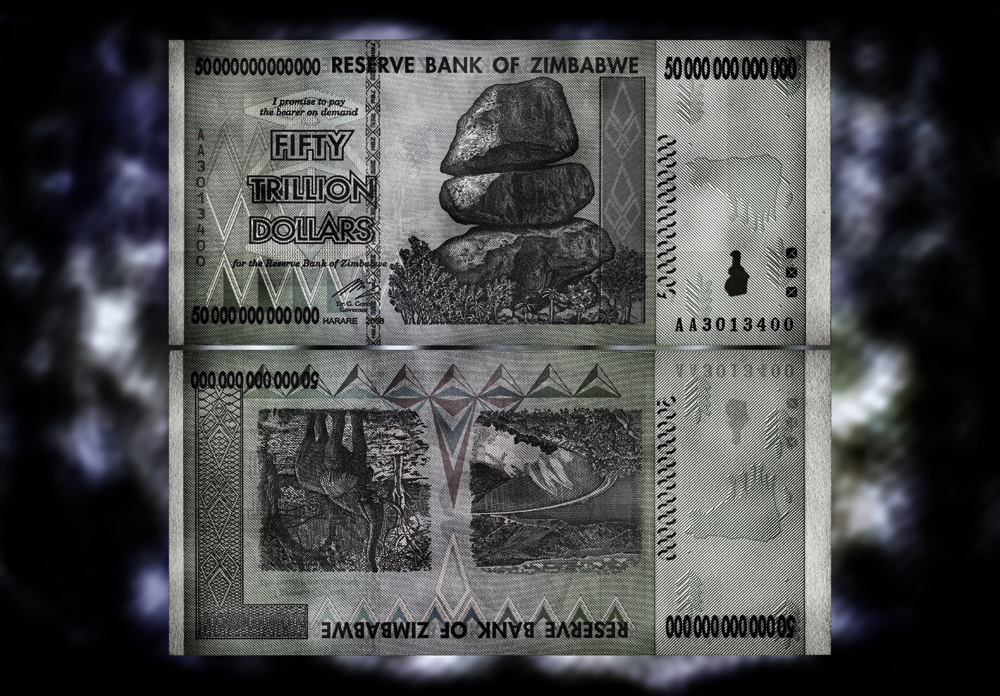